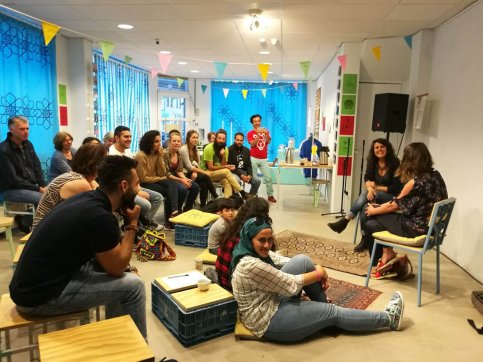 A quarter before the movie screening of Face B starts, people start to flood in. 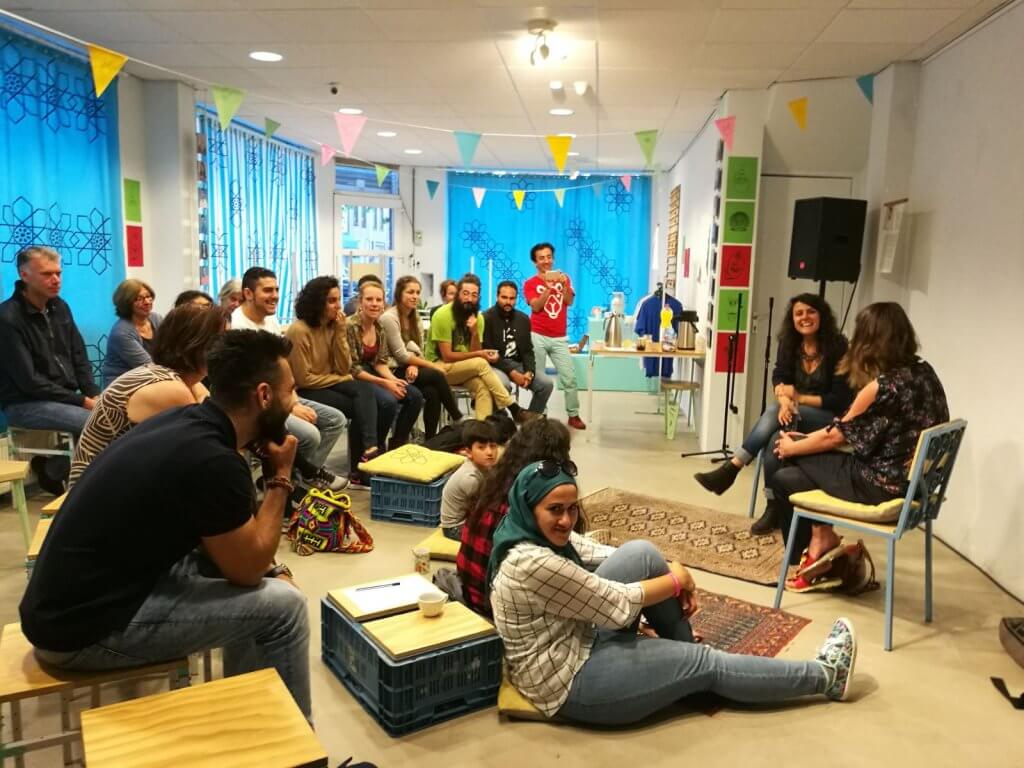 With tea and coffee in their hands, some people were talking in groups, some were sitting and chilling, and some were interested in looking around. In between this gentle ambience of enthusiasm, I talked to some of the audience.

Esther, our active participant and neighbour who has known De Voorkamer for more than a year, shared that she simply meets people here out of her routine life and she enjoyed coming to the movie screenings that she cannot normally find them in cinemas. Adrian from Damascus in Syria, who visits De Voorkamer from time to time, and with my and his “een beetje Nederlands”, it makes an interesting interaction between us with English, Dutch and body language. He said he has been to the Netherlands for more than 3 years now. “mijn een beetje Nederlands, jouw een beetje Nederlands, vrienden!” he said with a big smile.

Annemieke, who is a student in Utrecht, thinks it is nice to join the screening with her friend. Lisette, standing in the crowd, told me that she has known Minem, our host for the event, for a while and she always likes watching movies/ documentaries with a cultural-society context. I could totally feel that she is a food lover when she talked about our other events like International Dinner and Turning Tables. 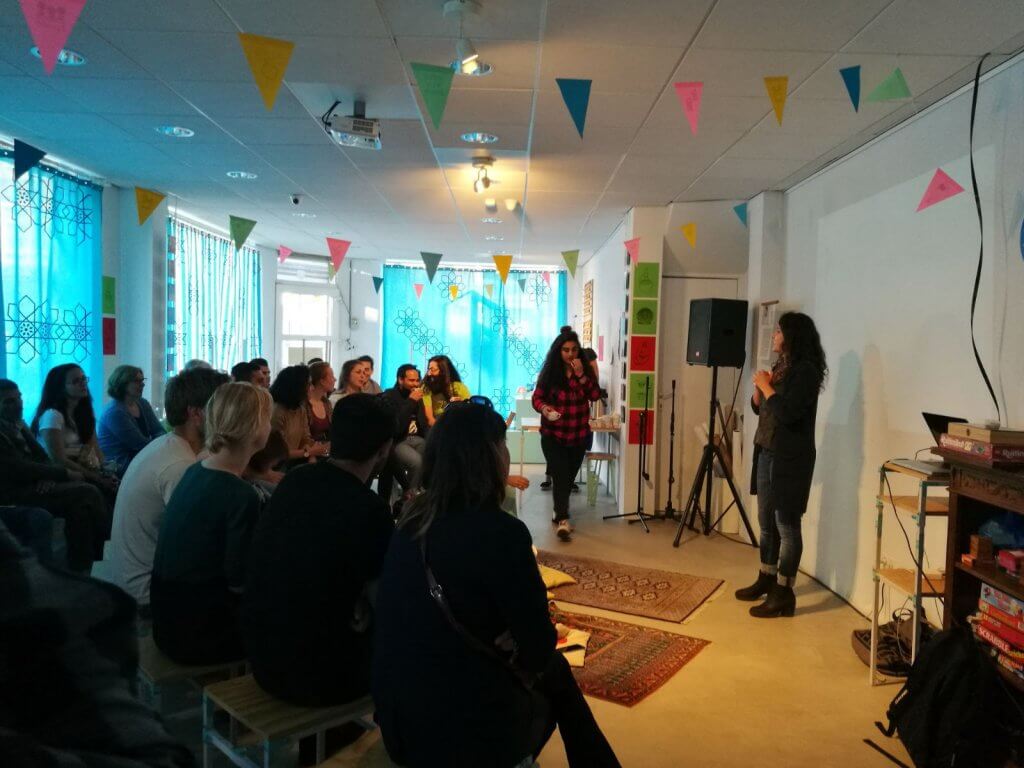 Our host Minem is giving an introduction at the screening.

And suddenly two elegant ladies caught my eye, it was the first time they came to De Voorkamer and they heard about us from In de Buurt and Stadsblad. I could feel Noor’s passion in different cultures when she told me her experiences in teaching expats Dutch and even she got a recipe of different cultures in Lombok back in 1998. “I can bring it here next time. It is amazing with a mix of all the cultures in Iran, China and Morocco…”

The light was dimmed as the movie started. Face B tells a story of a stranger in between cities and cultures while the character explores meaning of herself with music and poetry. During the Q&A session at the end, director Leila Albayaty replied that she got inspired by many people, she expressed her struggles and that she would like to question the binary opposition in the film of her own French-Arabic identity. For her future plan, she is determined to start a new film about her family background and produce an album in Arabic. 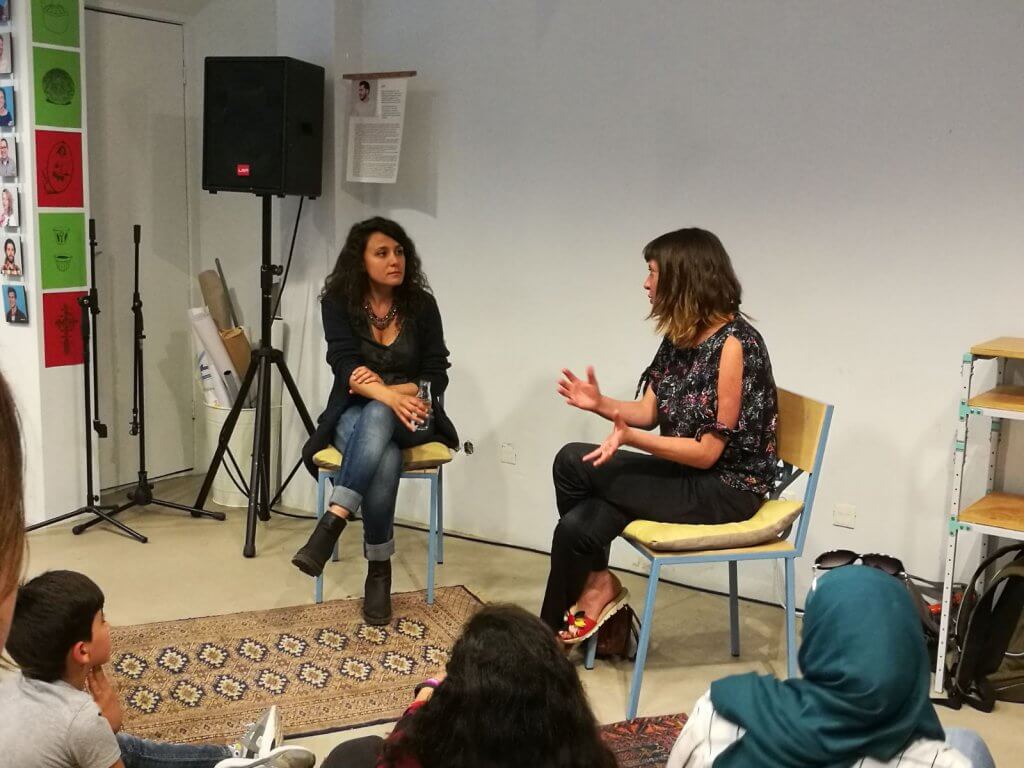 Director Leila Albayaty of Face B shares with the audience about her struggles and future plan during the Q&A session.

As the screening came to an end, Noor said as she continues in asking more about De Voorkamer, “I will come back for sure.” Bart, who came for the first time to De Voorkamer, “It is good to watch an artistic movie this evening. I can feel the enthusiasm between people and I would love to come back for Straffe Koffie on Wednesday. I love board games!”

The audience left almost like wind as the session came to an end. Yet, the meanings expressed among the audience stay in the space. Their words and remarks all along have revealed the movie screening is much more than the event itself, whether it is the excitement, interests and passion towards their life. Enthusiasm is a boomerang in De Voorkamer which makes people interact in this small space of Lombok.

Wish to enjoy a cozy night in De Voorkamer? Please stay tuned with us!